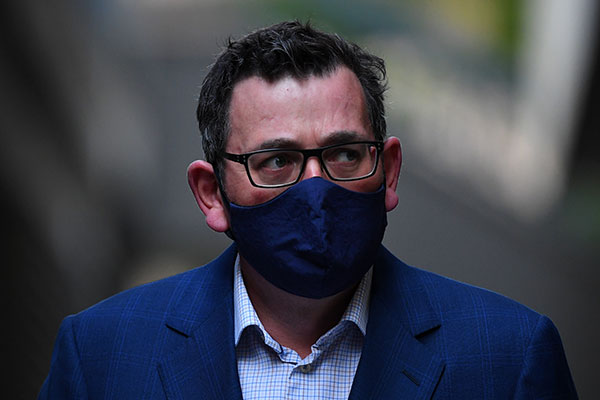 Melbourne's retail sector will take a hammering as the government confirms a widespread business shutdown to curt the coronavirus outbreak.

The three-tiered system was announced on Monday as Victoria recorded 429 new cases of coronavirus and 13 more deaths.

As the state started its six-week hard lockdown, the deaths brought the state toll to 136 and the national toll to 221.

It equals last Thursday as the state's worst day for fatalities.

The business shutdown will be divided into three groups, with the first group to stay open.

But the second group, including retail, some manufacturing and administration, must stop onsite operations as of midnight on Wednesday.

Retail stores can operate contactless "click and collect" and delivery services under strict guidelines, while hardware stores will only stay open for tradespeople.

The third group, including meatworks, will stay open - but under much stricter conditions.

"It is very, very challenging," he said.

"I never thought I'd find myself in a position where I'd have to ask people not to go work.

"Retail will look very different than it has ever looked."

Of the 13 deaths announced on Monday, eight were linked to outbreaks in aged care facilities.

There are 1089 active cases relating to aged care facilities and 706 actives cases among healthcare workers.

The latest grim figures come as the state begins a six-week lockdown, which is expected to run until at least September 13.

Under the new restrictions, residents of metropolitan Melbourne must follow an 8pm-5am curfew and can't travel more than 5km from home for shopping or exercise.

Meanwhile, regional Victoria has moved to stage three restrictions, with restaurants, cafes, bars and gyms to shut from midnight on Wednesday.

Mitchell Shire, north of Melbourne, has been reclassified as a regional municipality, meaning it will remain under stage three rules.

Meanwhile, Victoria's lower house has been suspended due to the escalating COVID-19 crisis in the state.

Both houses of parliament were due to sit from August 4 to August 6 and then from August 18 to 20 but members of the Legislative Assembly have been told they won't be back until at least September 1.

Statement from the Premier on business restrictions: pic.twitter.com/ktX49qJ4hU