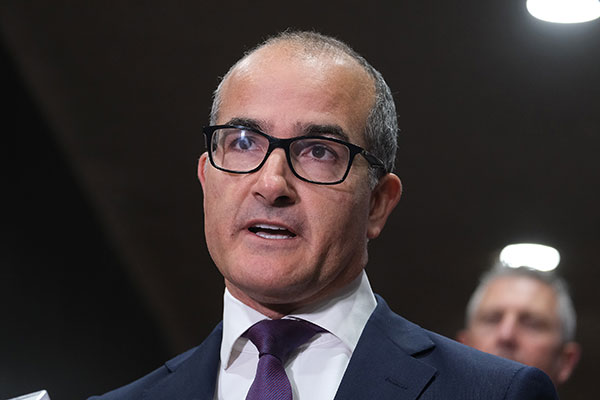 Victoria will begin a seven-day lockdown from midnight, in an effort to contain a COVID-19 outbreak in the northern suburbs that has grown to 26 cases.

One of those infected people is in intensive care and Acting Premier James Merlino said they are "not in a good way".

Mr Merlino confirmed the state will enter the "circuit breaker" lockdown at midnight on Thursday.

"Unless something changes, this will be increasingly uncontrollable," he told reporters.

He added the spread of the outbreak was causing great concern, with more than 10,000 primary and secondary contacts.

People will only be able to leave home to shop for food and essential items, provide or receive care, exercise, work or study if they are unable to from home, and get vaccinated.

The 5km travel limit will also be reimposed for exercise and shopping, as will compulsory use of masks indoors and outdoors.

All non-essential retail will close but essential stores including supermarkets, bottle shops and pharmacies will remain open.

Cafes and restaurants will only be able to offer take-away.

Childcare and kinder will stay open, but schools will close.

Professional sports events such as the weekend's AFL games in Melbourne will continue, but without crowds.

Mr Merlino also announced the state's vaccine program will expand, with people over 40 now eligible for the Pfizer jab.

In his media conference, Mr Merlino highlighted the slow rollout of the Commonwealth vaccine program and continued problems with hotel quarantine.

"We are not through this pandemic until we have had the successful rollout of the federal government's vaccine programs and we have safe alternatives to hotel quarantine," he said.

"It's not a criticism, it's just a fact," Mr Merlino said.

While the lockdown could be shorter than seven days, Chief Health Officer Brett Sutton is doubtful.

"We have to ready ourselves for seven days of this lockdown," Professor Sutton said.

He added all the active cases remain linked.

Prof Sutton said the Indian B1.617.1 variant of the virus that has caused this outbreak is particularly concerning.

"It really is rapid and that's led to the exponential increase (of contacts)," he said.

There are now 79 exposure sites across Melbourne and regional Victoria, including the MCG and Marvel Stadium.

There were infected people at AFL matches at the weekend, while another visited three bars in Prahran and South Yarra, which is of concern to authorities.

Prof Sutton strongly defended Victoria's contact tracing efforts as the outbreak spreads, saying it is an "absurd proposition" that the system is not working properly.

Genomic sequencing shows the outbreak is linked to the case of a Wollert man, with an official SA report on Wednesday suggesting he caught the virus from aerosol transmission in an Adelaide quarantine hotel.

But a definitive link between the Wollert man and the Whittlesea outbreak has not been established.

There are now 34 active cases in total in Victoria, including cases in hotel quarantine, with more than 40,411 tests conducted in the 24 hours to midnight Wednesday.

Some 12,677 vaccine doses were administered during the same period.

The lockdown is Victoria's fourth.

The state's most recent was the five-day "circuit breaker" lockdown in February when the virus escaped hotel quarantine and infected more than a dozen people.