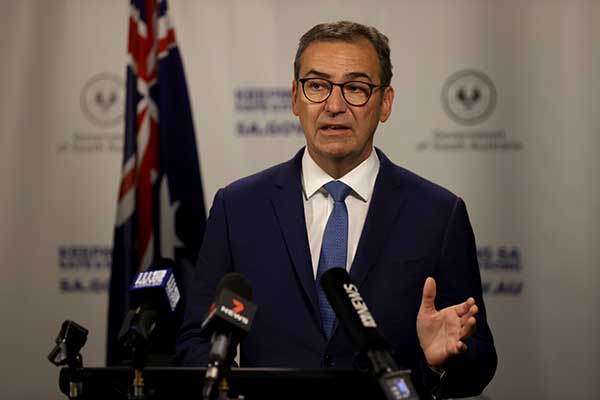 South Australia has reported 25 new COVID-19 cases, its highest daily figure for more than 18 months, amid concerns over delays in naming exposure sites.

Premier Steven Marshall revealed the new cases on Wednesday, the highest daily number since April last year and more than double the number of new infections from the previous day.

Mr Marshall said with the state entering the suppression phase of the disease, new infections could be expected every day.

"We've been pretty open and transparent about the way that we moved from the elimination strategy to the suppression strategy," he said.

"If you go back two months, we didn't want to have a single case of community transmission.

"We're at suppression now. We're going to have cases every day going forward. But it is still important we don't let it just run through our state."

The premier also reported there had been no positive cases detected in the state's Indigenous APY lands despite earlier concerns when COVID-19 was found in wastewater sampling.

SA Health said the new infections on Wednesday included 17 people who were fully vaccinated, three who were unvaccinated and five people whose vaccination status was unknown.

The new cases took the number of active infections to 92.

Mr Marshall said he remained convinced the government had done everything possible to be prepared for the rise in coronavirus cases.

However, the Labor opposition questioned the ability of contact tracers to keep up after new Adelaide exposure sites were revealed on Tuesday night, 10 days after the exposure occurred.

That meant some affected people were already beyond their one-week quarantine requirement.

"When there's repeated reports of contact tracing delays, at the same time as the government is trying to hire more staff, it shows the systems were not prepared," Opposition Health Spokesman Chris Picton said.

Mr Marshall said the release of the exposure sites remained the public health protocol, even if they were identified late, and there was still a requirement on people to get tested.

SA currently has multiple exposure sites with about 1400 people in quarantine.

But the state has reduced the quarantine period for returned international travellers from 14 to seven days.

At the same time, it will maintain testing rules for travellers, including the extra "speed bumps" for people from NSW, Victoria and the ACT, who must have a test before arriving and another on arrival.

Wednesday's infection spike also came amid a scare for 22 Adelaide nursing homes after it was confirmed two health workers who visited the sites had tested positive.

UnitingSA said three of its centres - at West Lakes, Seaton and Grange - were involved, with both West Lakes and Seaton closed to visitors.

Double-vaccinated visitors are still allowed at the Grange centre.

The organisation said an infected person came into contact with a very limited number of staff and residents.

"UnitingSA is pleased to advise that all residents who came into contact with the medical practitioner have returned negative test results as part of the initial round of testing," it said in a statement.