More charter flights to bring Aussies home - The federal government will charter another 20 flights to bring home Australians stranded overseas.The decision follows international air carrier Emir ...
Emirates stops flights to Aust east coast - International airline Emirates has abruptly suspended its flights to Australia's east coast, leaving it more difficult for Australians overseas to mak ...
Victoria eases border restrictions for Qld - Victorians stuck in Brisbane will be able to return home from 6pm Saturday, Victorian Premier Daniel Andrews has announced.Victoria on Saturday again ...
Homeschooling numbers continue to rise - Some parents struggled to help their kids learn at home during last year's coronavirus lockdowns but others found it so beneficial they decided to con ...
"Unacceptable": Labor & Greens slam latest health, housing data - The opposition parties are queuing up to attack the Gutwein Government over the latest snapshot of health and housing in Tasmania. New quarterly d ...
Vic mother likely killed children: police - Police believe a Victorian mother killed her three children before taking her own life after the four were found dead in a north-west Melbourne home.M ...
Fake ID might save Joe the pigeon - Joe the pigeon might be saved, with the flap over his fate apparently a case of mistaken identity.Animal welfare group Pigeon Racing Victoria is confi ...
Rare whales spotted off Tassie coast - Wildlife watchers are excited after a rarely-seen visitor to Australia turned up off Tasmania's east coast. Patrons onboard a tourist boat were ov ...
Low carbs may put diabetes in remission - Low carbohydrate diets could help put type-two diabetes into remission, an international study suggests.After a six month period, patients whose daily ...
NSW eyes lighter COVID restrictions - The NSW government wants to ease restrictions after the state again recorded zero local COVID-19 cases, but says testing numbers need to rise first.So ... 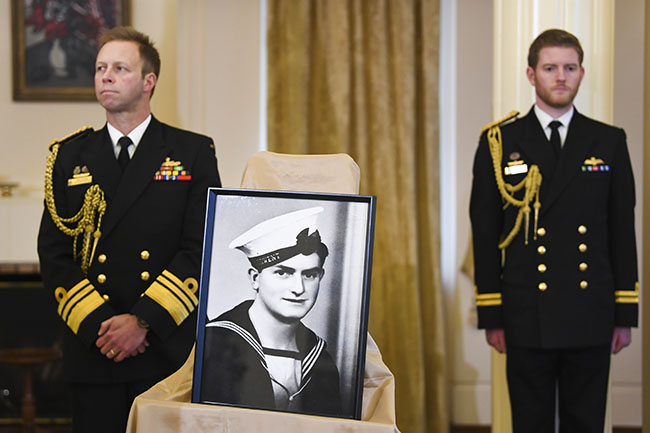 On the 78th anniversary of his heroic World War II actions, Teddy Sheean has posthumously been awarded Australia's highest military honour for giving his life to save his mates.

Governor-General David Hurley on Tuesday presented the Victoria Cross to family of the ordinary seaman at a ceremony at Government House in Canberra.

Tasmania-born Sheean died aged 18 in 1942 when the HMAS Armidale was sunk by Japanese bombers in the Timor Sea.

He strapped himself to an anti-aircraft gun, fired at enemy planes as the ship went down and is credited with saving the lives of 49 crewmates.

"He gave his life so those who remained on the surface had a fighting chance at survival," Chief of Navy Vice Admiral Michael Noonan said on Tuesday.

"Teddy did not choose sacrifice in an attempt to win a war, he did it to save his friends."

Governor Hurley remembered Sheean as charismatic and full of confidence.

"His rowdy last night in Latrobe (in northern Tasmania) before departing is still a strong part of local folklore," he said.

"In the words of his nephew, who was 11 when Teddy went off to the war ... 'He never picked a fight, but he never walked away from one'."

Sheean's family, including nephew Garry Ivory who was at the ceremony, was among those who have for decades fought for recognition. 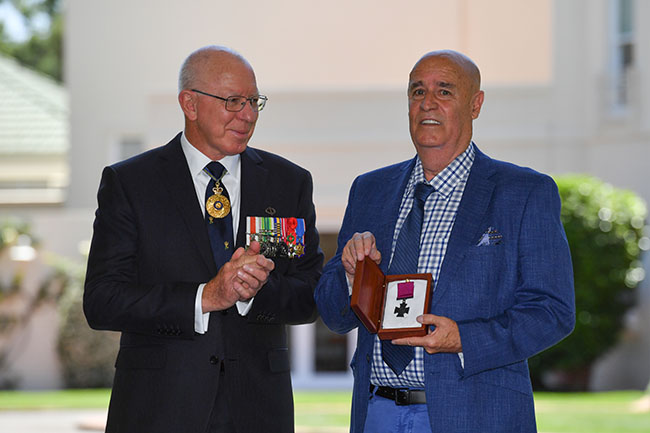 Governor-General David Hurley (L) presents the Victoria Cross to Garry Ivory, nephew of Ordinary Seaman Edward ‘Teddy’ Sheean on the 78th anniversary of his death while trying to save his shipmates during World War II, in Canberra, Tuesday, December 1, 2020. (AAP Image/Mick Tsikas)

"He now takes his place as one of the guiding lights of the country he indeed served to save," the prime minister said.

Sheean, the youngest of 14 children, is the first member of the Royal Australian Navy to receive a Victoria Cross.

An expert panel in July found an earlier decision to deny him a Victoria Cross was wrong, with Mr Morrison describing it as a "substantial injustice".

The Queen in August agreed to award Sheean the medal, the 101st Victoria Cross to be given to an Australian.

It will be put on display at the War Memorial's Hall of Valour.

HMAS Sheean, a Collins Class submarine, is the first and only Royal Australian Navy ship to bear the name of an ordinary seaman.