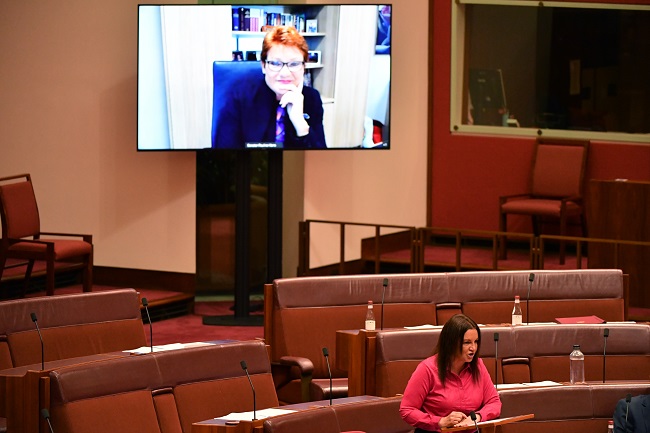 A bill from Pauline Hanson's One Nation calling for an end to vaccine mandates has been voted down in the Australian Senate.

The far-right minor party claims Premiers are abusing their powers and the Prime Minister needs to step in.

Speaking via videolink, the One Nation leader told Parliament, people's freedoms are being eroded, while talking up vaccine side effects and unproven COVID treatments.

"State governments are relishing this extraordinary power to command and control the people they are supposed to serve," Pauline Hanson said.

"They're desperate to keep this power for as long as they can. They have ignored the Prime Minister's national plan and the decision of National Cabinet."

That was followed by a scathing rebuttal by Tasmanian Indepent Jacqui Lambie.

"If you get behind the wheel of a car and drive twice the speed limit, you may be comfortable taking that risk with your safety. But you’d be putting other people’s lives at risk. And you don’t have the right to do that. And you will more than likely lose your licence," Ms Lambie said.

"You’re not being discriminated against. You choose to do something that puts other people’s lives at risk and you will be accountable. You will be held accountable. But that choice is that simple. That’s what we’re talking about."

In the end they were the only votes recorded in favour, with Ms Hanson and colleague Malcolm Roberts unable to vote due to them not being in Canberra.