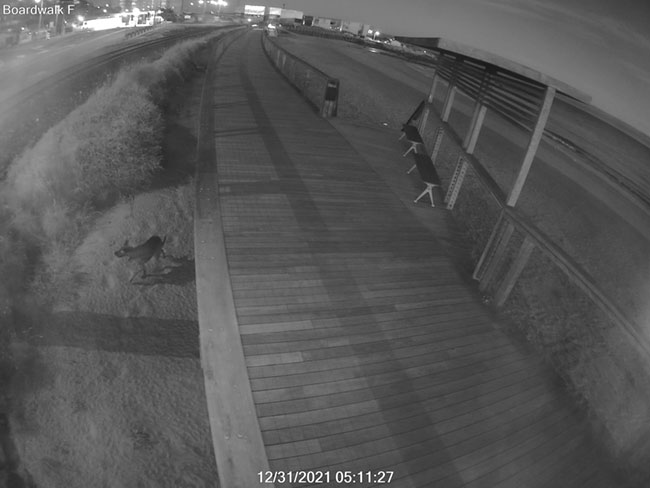 A supplied CCTV image of a dog possibly linked to the death of 17 little penguins found dead at West Beach in Tasmania on December 31, 2021 (AAP Image/Supplied by NRE Tas)

Wildlife authorities in Tasmania are calling for help to identify a dog thought responsible for killing 17 little penguins in the state's northwest.

The birds were found dead at West Beach in Burnie on December 31.

Tasmania's Parks and Wildlife Service released CCTV images of a dog that was in the area around the time of the attack.

"It is possible this dog is the animal responsible for the penguin deaths," state compliance coordinator Michael Spaulding said.

"We ask anyone who may have information to assist with identifying this dog to please make contact with us."

Post-mortem investigations determined the little penguins, the smallest of all penguins, died as a result of a dog attack.

"Dogs can cause a lot of damage to penguin colonies very quickly. It is important owners control or contain their pets effectively," Mr Spaulding said.

Owners could be fined up to $5040, have their pet destroyed, and be liable for other costs.

The penalty for taking a dog into a prohibited area containing sensitive habitat for native wildlife was increased to $3360.

There were several mass penguin deaths due to dog attacks in 2018 and 2019, including one at Low Head where 58 perished.